Before learning about strain gauges, learn what “strain” is first.

External force applied to an elastic material generates stress, which subsequently generates deformation of the material. At this time, the length L of the material extends to L+ΔL if applied force is a tensile force. The ratio of ΔL to L, that is ΔL/L, is called strain. (Precisely, this is called normal strain or longitudinal strain.) On the other hand, if compressive force is applied, the length L is reduced to L- ΔL. Strain at this time is (- ΔL)/L. Strain is usually represented as ε . Supposing the cross sectional area of the material to be A and the applied force to be P, stress σ will be P/A, since a stress is a force working on a definite cross sectional area. In a simple uniaxial stress field as illustrated below, strain ε is proportional to stress σ, thus an equation σ = E x ε is satisfied, provided that the stress σ does not exceed the elastic limit of the material. "E" in the equation is the elastic modulus (Young's modulus) of the material.

So strain is a very small value.

What is STRAIN GAUGE

Strain changes in only very minute values, so how is this measured with a strain gauge?

In order to measure change in the resistance value due to extension of metal (resistor), how is a strain gauge structured?

A strain gauge is constructed by forming a grid made of fine electric resistance wire or photographically etched metallic resistance foil on an electrical insulation base (backing), and attaching gauge leads. 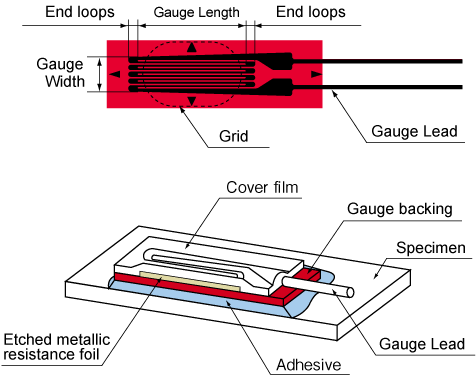 We have seen how a strain gauge is structured. Next the principle of how strain is measured based on change in a resistance value due to extension of metal (resistor) will be explained. 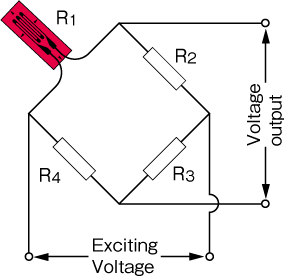 The voltage output of the circuit is given as follows.

Here, if R=R1=R2=R3=R4 the resistance of the strain gauge changes to R+ΔR due to strain. Thus, the output voltage Δe (variation) due to the strain is given as follows.

When measuring with a strain gauge, it is connected to an instrument called a strainmeter. The strainmeter configures a Wheatstone bridge circuit and supplies exciting voltage. Measured strain is indicated on a digital display and/or output as analog signals.

Strain gauges are provided with many convenient features, but they also have limitations. Each strain gauge has its limitations in terms of temperature, fatigue, the amount of strain, and the measurement environment. These limitations must be examined before a strain gauge is used. 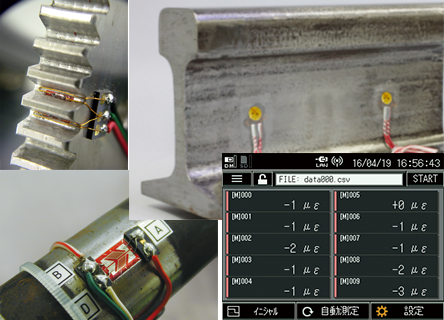