In the mechanism of an automobile, there are many items to be measured, such as the maintenance of the engine and electrical instrumentation as a power source, effectiveness of power transfer to the drive wheels, running stability which influences the riding comfort, and the braking performance which controls the running. Our measurement system covers the items below with transducers especially designed for respective measurement objects. An overall system can be configured even including a recorder and a PC. 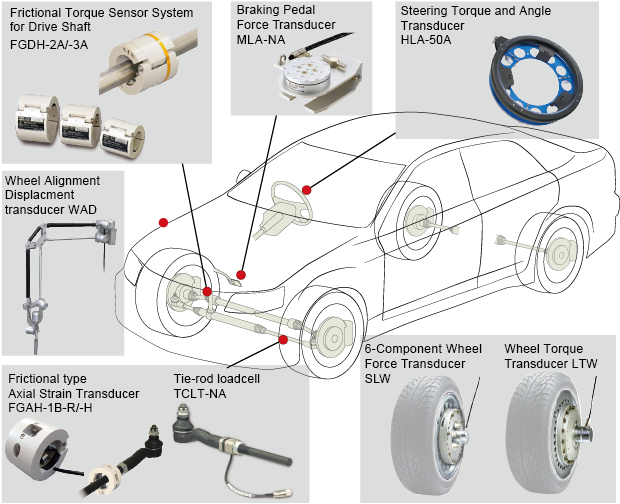 Wheel Alignment Measuring System WAD/WAM
Can be installed in combination with a 6-component wheel force transducer (SLW series) for measurement of 3-orientation orthogonal displacement, camber angle, and steering angle imposed by the road on the tires during travel.

Braking Pedal Force Transducer MLA
This is a load cell to measure the brake pedal force. It can easily be attached without modifying the pedal.

Steering Torque Transducer HLA-A
This is a transducer to measure the torque and angle of steering in running test.